His Name Is Malcolm. 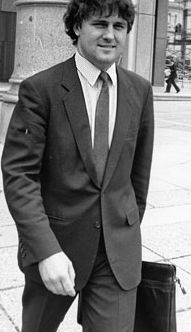 We have a new Prime Minister. He walks on water. And there are refugees.

Now some Western countries have decided that maybe their borders aren’t as open as they were before and this means that other countries will get them. I don’t know why they are heading to the West anyway. All the growth is going to come in the other areas so for the life of me I cannot work it out. I guess they think they can earn more money and well, they probably can. But standard of living.

I mean, would you wait and think I’ll wait until our garden is tended again or would you bite the bullet and say, nah, time to move?
Homeless. That is one psychological rootlessness.
I cried when my parents said they might move house – and the old one stays in the family. I sure have alot of blackfella in me because the ugly apartments they put up in the Eastern suburbs do my head in. It’s not like we live in one of the beautiful cities of the world with tons of light and natural bush. So yeah, I’d build an ugly concrete bunker. That’s a great idea.
Did I ever tell you about the magnificent subway that runs under Moscow?
That is something to see. It’s quite incredible. I guess if the aliens came they would only remember Putin but I am telling you those subways are something else. I thought they were great. I guess they are as beautiful as the Esfahan and well, I really loved the mosque’s I saw this year but well, I am talking about Russia now and don’t you go bitching about Russia. We might be all mercenary Romans if it wasn’t for a Russian. That’s not quite true but you get my historical meaning. And those subways can tell you alot if you bother to go there.
I am not sure I loved Berlesconi with Putin btw but that’s aside. That’s for later. There is a fair bit to talk about on that front. Obama meeting with Xi and all that.
Anyway, while the refugees of the world deal with domestic uncertainty and kids in tow, poor bastards,  I’ve been reading Gone With the Wind. I laughed my arse off.
It had a really good bit about old civilisations just dying away but I think that is just crap. Howard’s End. Ditto. Etc Etc. Ashley and the old world and all that.  I never heard anything so stupid all the people fighting to make money haven’t got any more strength than the old ones survival of the fittest my fat backside. Sounds to me like sour grapes from people who bitch about people they know nothing about.
If it was survival of the fittest Keating wouldn’t have made the Redfern speechand we wouldn’t support the arts so I think they are full of it. People in glass houses in the media supported by the biggest act of government kindness I sincerely doubt it is survival of the fittest anywhere. Where do you think those military boys get the money? The tooth fairy?
But I do think it might be right that if you fight a battle when your military isn’t the biggest, you have a problem on your hands. I mean, it doesn’t mean you roll over and die if someone is being an out and out lunatic but well, you gotta get clever. I am not sure anyone listened to Rhett and I reckon, well, I think I have been Rhett.
I ain’t Scarlett anyway I am Rhett because these idiots don’t know a good thing when they got it. People working for free to do good things and what do you get? Sniping from people so rich they peel their skin off rather than fight. I am over that crap. Nothing there when the skin peels off anyway. My sister died with red dots all over her and god she was worth ten of these idiots.
They can curate a personality but they can’t live one. I’d prefer to die with fashion’s latest hiding the blemishes. Roll in the mud after Saturday sport. Mark my grave with a Holden sticker because in the end, everyone is going to remember if you were a dick.
And that doesn’t mean just handing money out to people because in the end, they see a middle class chick coming and they just smell money. And if there is only one of you, well someone has to be the good angel and someone the bad. It can make for some horrible self conversations but you godda hang tight or you’ll die nothing but putty in the hands of some idiot moron.
So Malcolm has said something about Syrian strikes.
People start burying their children again around here and I am going to Canberra with a shot gun. I don’t care who he is married to.
Well Lucy’s a Hughes. Argue for a living that lot.
Shit.